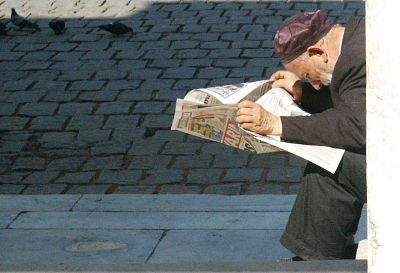 Puzzled is the only word I can use to describe market behaviour on various occasions. No more so than the UK election on Thursday. Not so much the result but by the reaction of the markets versus the news feed that appeared throughout the evening.

Sky news at 12.00am (Friday morning) flashed up ‘Prime minister May’s election gamble backfires’ therefore I quickly nipped over to Betfair to expect a price of ‘No overall majority’ at around 1.20 ish.

Well I wasn’t expecting this price below! 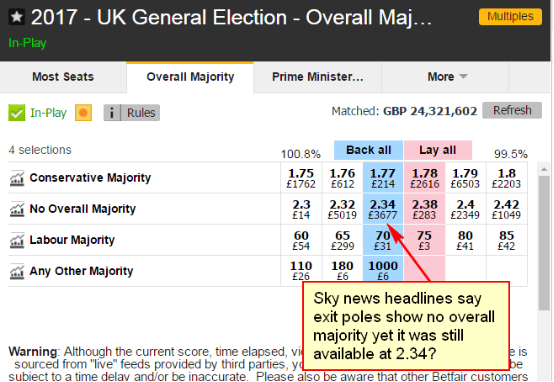 Do the Betfair traders know something the media don’t –  Surely not? A quick click on a few other political and polling websites showed the evidence from exit polls was overwhelming and Theresa May was indeed about to fail in her attempt to win an overall majority to give her a strong hand in Brexit negotiations..

Yet the price on Betfair was flying in the face of all this opinion – why?

Had the political Betfair traders fallen asleep, was the market distorted by scalpers or market manipulators? Whatever the reason a price of 2.34 when the overwhelming consensus was of a ‘No Overall Majority’ was too good to miss.

A possible explanation for the markets not reacting to current media and poll organisation reports was maybe the loss of credibility born out of getting predictions hopelessly wrong with Brexit and Trump? – Who knows?

Obviously with these type of fast moving events you have to be quick to profit.

Unfortunately due to scrambling to take screenshots and checking a few others sites to see whether Sky may have got it wrong I missed the 2.34.

As you can see below when next checking the price it shortened down to 1.98 and then quickly after to 1.77. At which point I thought it best to leave the bet alone even though it still could have been considered value at that price. 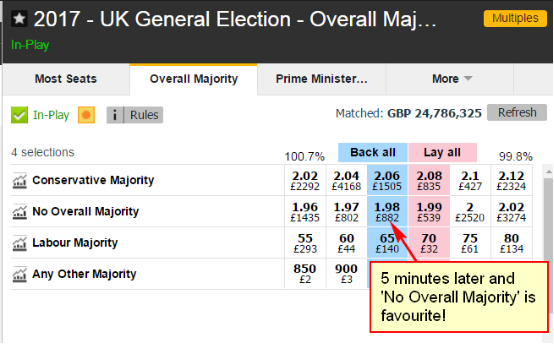 On the election itself, surely with 48% of voters wanting to stay in Europe this was not going to be as clear cut as many made out. Those who wanted to stay in (often younger voters) were targeted by Corbyn and as such made sure they put their vote in.

Those who voted ‘OUT’ on the other hand thought it was all over bar the shouting and didn’t bother voting. That  led the way for Labour to gain more than anyone expected. Well that’s my take on it.

The point is, if you can react to live events quick enough you really can get some tasty wins even when the evidence is clearly overwhelmingly and makes a mockery of the prices on offer. Proving neither markets or media should be taken as gospel.

So if you ever expect a price on any market lower than what’s on offer as in the above case  – snap it up and quick!

Against The Double (Lay Strategy):

Steadying the ship is the name of the game over recent weeks to protect gains already made. We are now at touch below +16 points after touching +20pts on a few occasions.

If there is any plan that needs a slight loss recovery plan it’s this one, the question is which ones to use? More news soon.

That’s all for now and see you next week!