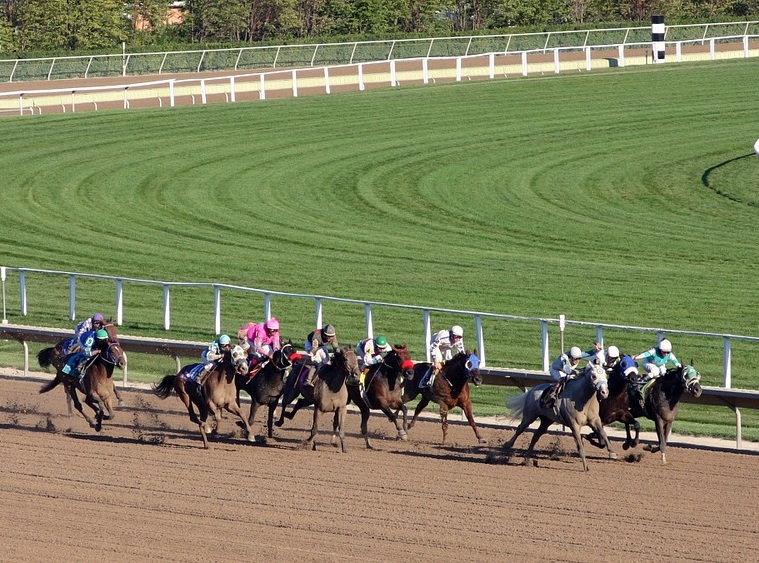 You have probably heard of the term ‘a knocking each-way bet’. Well there are a few angles I like to deploy especially when market conditions are right.

By that I mean when the market prices show that there are only 2 viable runners in contention, and if the race is a NON Handicap.

Non Handicaps are generally more reliable in terms of the top 3 in the betting having a much higher win and place strike rate than in Handicaps.

In Handicap races the ‘handicapper’ (who’s job it is to allocate weights to each run based on previous runnings) would love nothing more than for all runners to cross the finishing line together. That would  mean he has done his job correctly in giving each runner an equal chance of winning.

As such it makes handicap races tricky propositions to bet on. Unless of course you specialise in handicaps and spot the value in those ‘well handicapped horses’, or unless you are privy to some inside information.

If you haven’t got inside information or if spotting value is not your game then you can let the market give you some direction of how the race is going to go based on the selections isolation in the betting market. By that I mean when the first two in the betting are well clear in price from the rest of the field. Then when they are, choose the 2nd fav and go each-way.

For example, below we have the 1st and 2nd fav’s well clear of the rest of the field and with 2 non runners reducing the field to below 8 runners Betfair will still honour 3 places albeit at reduced odds. 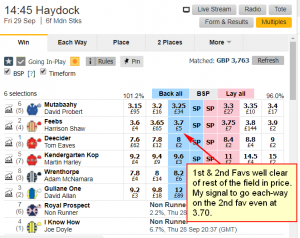 So you would then head to the place market to place the second part of your each-way bet. 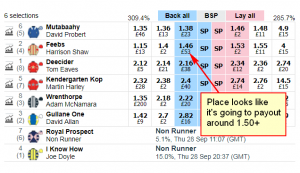 You should get around 1.50+ with such selections but this was a tad before the race off time. That means even if we don’t win we are highly likely to grab a place and receive 50% of our total outlay back.

A nice winner as below! 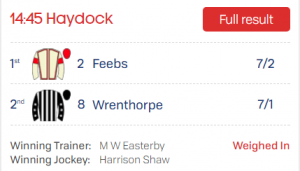 Here’s another one on the same day. In fact, these would have been the only two qualifiers.

Both of the above are what I would call “knocking each-way bets” and these were the only two for the day when viewing all UK races where the 1st & 2nd fav’s were at least 4 betting points clear of the rest of the field.

Another thought is to go each-way on both, or even an each-way double?.This one would have paid out a whacking 15/1 at SP! Food for thought hey?

This is a decent blueprint from which to build into something really special and what’s more I have a turbo charged version of this method where the ink is well and truly dry in terms of fixed rules in my Quick-fire monthly course for those interested? It’s great when you enter the market knowing you have weighted the odds firmly in your favour, and that’s what this gambling lark is all about when you think it through.

Frankie Does it Again!…

What a performance by ‘Enable’ in the Arc De Triomphe on Sunday.

The Arc can be a rough race at the best of times and to keep your horse out of trouble is no easy feat. That’s what Frankie managed to do in style helped by the enormous horsepower beneath him.

In watching the race I noted Enable was pulling hard and as such thought this could be to his undoing come the turn for home – How wrong could I have been?

Other jockeys have been known to say if you ever see Frankie’s backside then you have lost the race as there will be no catching him. So it proved with Enable steaming ahead late on.

John Gosden must be over the moon with his awesome 3 year old and he went clear to take the race by two and a half lengths and give Dettori his 5th Arc win and bag connections a staggering €3,150,000 in prize money!

Both Teams To Score (BTTS) – No losing days….

Well this test is currently in profit with very little sweat so far. However we have decided to opt for a simple staking strategy that may suit it better going forward.

Suffice it to say this new staking plan would have delivered +10.38pts so far as opposed to around +5pts using the old plan. As such it’s going to be adopted from heron with this test.

When developing a system you can get through many notebooks full of results with various twists and tweaks before you arrive at what you want.

So if you want to see a system in development and maybe play to small stakes, then nip over to the testing pod daily at;